ATTENTION: The administration decided to allow the use of the bot, but in no way helps in its installation and does not provide technical support on any issues related to bot programs.
We disable the bans and monitoring of bot bots in protection (if you have any problems with the bot, contact the developers of these programs!)

* There are restrictions in the first 2 weeks after opening (clickable)

Main changes between V7 and V8 :

Frenzy now adds physical attack with any type of weapon

Frenzy and Guts can be used at the same time

Chant of Victory only adds physical stats, does not subtract running speed

Prophecy of Water adds only magic stats, does not subtract running speed

Disabled auto-learning skills
Removed repetitive and unnecessary skills from learning skills
Taking into account the transfer of buffs to the clan skills, the multiplier of the cost of learning common skills for SP has been increased from x4 to x8
Removed the ability to use olympus sticks, cans for running, casts, speed attacks
All main buffs are now clan (passive) and are learned at 0-5 clan level

Clan halls have been updated, namely, only 5 clan halls are available for purchase: Trades every 168 hours (7 days)
Use Cost increased to 10,000,000 adena
The following buffs are available to the owner of the clan halls:

Differences between v5, v6 and v7:

2 castles are available for sieges - Giran and Aden
Sieges every 3 days
Registration for sieges closes 30 minutes before the start of the siege
When owning a castle, all clan players receive an additional clan skill

The farm zone is completely located on Dino Island, the drop S grade desks in MOS have been removed
We will slightly alter the delay system for taking zeros, so that new players can catch up with the old ones
By popular demand, we changed the standard interface to "Iordanov" with built-in functions for inserting HP, enchant ammunition and skills

, issued for participating in auto events and winning the Olympiad

To upgrade accessories, tattoos from level 12 and above - Olympiad Coin is required
Disabled class battles at the Olympiad
Hiro weapon, additionally adds Upgraded weapon stats (+ p / m attack)
Nephilim / Zombie shields have been added to the drop for all Halisha, as well as a 5% chance to knock out Clan Skill Coin, High Grade Life Stone 76 1-2 pieces - 100%, 1 A Grade Part, the quest for 4 cups will not be available immediately, but through a couple of days after opening
* A PvP zone is set in the entry zone
Now A Grade Part can be exchanged for Low-A weapons / armor / jewelry in the gm shop
Clan Skill Coin drop returned to Cherub Galaxia drop with 50% chance - 1pc
Returned the "uber" stats of the tattoo, now the tattoo is added by 3% from 1 to 12 levels inclusive, 4% from 12 to 18 levels and 5% from 18 to 24 levels
* stats magician. attacks are added 50% more, 4.5% from 1 to 12 levels, 6% from 12 to 18 levels, 7.5% from 18 to 24 levels
* running speed stats remained unchanged
The cost of TP in high-lock is increased to 100,000 adena, the price of noble TP in these zones is 10 times less - 10,000 adena
Premium account rates increased to х2
The stats of epic jewelry have been updated, and an upgrade now requires more ordinary jewelry, for example, to upgrade to 1 level you need 1 part of ordinary epic jewelry, to 2 level - 2 parts + part of 1 level, 3 parts need 3 parts + part 1 level
* Except Core / Orfen
Added a drop in the form of an AQ Stone to the drop for Queen Ant

We are using Interface from Iordanov version 3.6.9
Main functions : 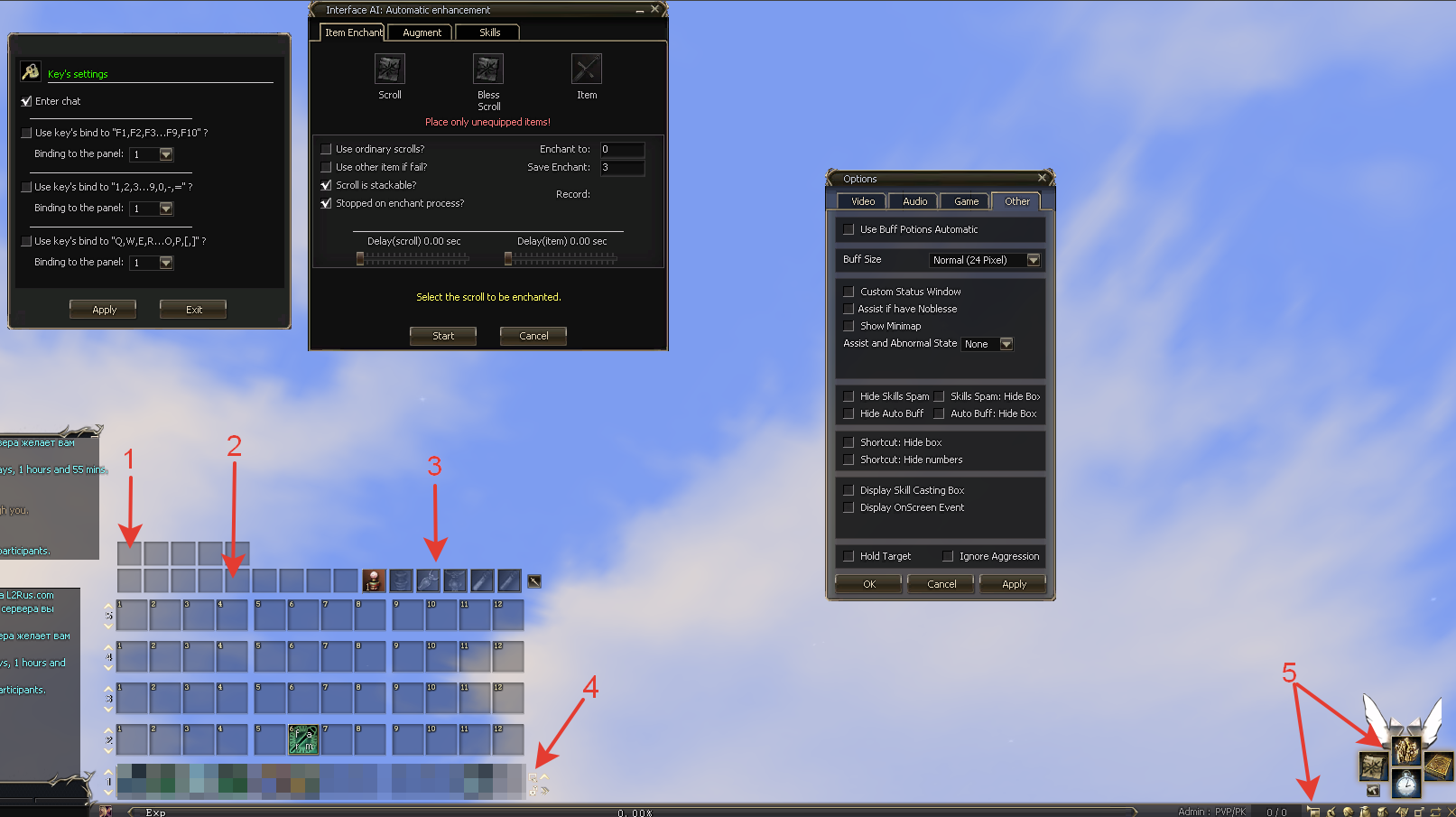 When creating a character, you get NG armor:

For coupons, you can get NG weapons from the Newbie Guide, weapons will stop wearing if you have 1 or more PCs 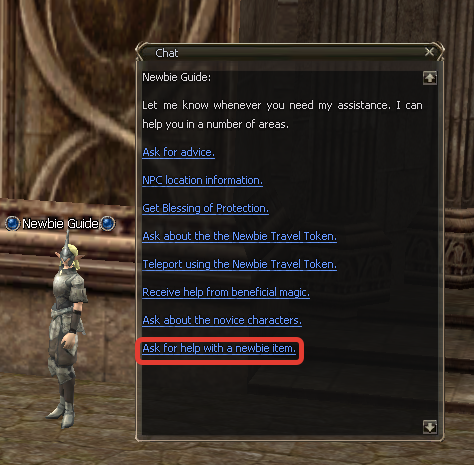 When owning a castle, all clan players receive an additional clan skill Added two new locations, teleportation is possible from the usual GK in Giran: All mages have the same stats regardless of race:

All warriors have the same stats regardless of race:

Added reward for PvP in the form of XP / SP / PVP jars:

New types of armor add an active skill when all parts of the armor are enchant by +10:

Reworked the drop in the Primeval Isle location

Toggle skills that do not cut stats have been moved to passive ones: Many runes, which can only be obtained by game

** IMPORTANT Weaker runes replace the effect of a stronger rune
Reworked clan system, skills
Ability to craft the main server currency
Added the ability to upgrade A / S armor
The number of mobs on all spots is doubled
Added tattoos - 24 levels: Added S weapon upgrade, level 14 CA is required, CA upgrade from level 13 to 14 is possible only on RB "Anais" in Monastery of Silence, with a 15% chance

The ability to upgrade epic jewelry (3 levels of each part)

Added Block Buff to all characters:

Frenzy now adds physical attack with any type of weapon

Frenzy and Guts can be used at the same time

Chant of Victory only adds physical stats, does not subtract running speed

Prophecy of Water adds only magic stats, does not subtract running speed

The ability to use totems with any weapon.
Disabled the ability to use healing skills on raid / grand bosses.
Added statistical cooldown for some types of skills (hit, lethal, healing hp / cp, etc.)
Light Armor Mastery works with all types of armor
For convenience, the mass sweep skill has been added, available from level 75 for 150,000,000 SP and 20,000,000 adena in the "Reset Skills" section.

Epic bosses are strengthened: defense 10 times, attack 4 times.
Ant Queen, Zaken, Baium, Core and Orfen are level 78
A / S grade armor, weapons and jewelry have been removed from the drop.

Respawn Flame of Splendor Barakiel - 6 hours + - 30 minutes, announcement 5 minutes before respawn (Passive Noblesse added to the drop with a 20% chance)

A grade egg clan has been removed from the drop; Armor, weapons and jewelry A / S grade.

* Reinforced only RB above level 46
Added Nephilim / Zombie shields to the drop for all Halisha's Shadows, 5% chance to knock out Clan Skill Coin, High Grade Life Stone 76 1-2 pcs - 100%, 1 A Grade Part
* Quest 4 cups (four goblet) will not be available immediately, but a couple of days after opening
* A PvP zone is set in the entry zone
You can find a description of the quest here:
https://linedia.ru/wiki/Four_Goblets

* Additional drop not added to call and instance rb 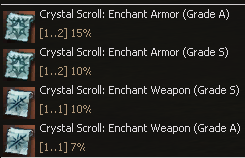 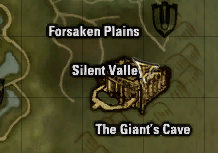 You can get A Grade Part only by killing Halisha's Shadow, drop 1 A Grade Part - 100%
You can only get with Khalisha by taking the Four Goblet quest.
Conditions for entry:
You must be in a party (at least 2 people)
Party characters should be nearby

All characters in the party must have at least one Entrance Pass to the Sepulcher with them.

* Quest 4 cups (four goblet) will not be available immediately, but a couple of days after opening
* A PvP zone is set in the entry zone
You can find a description of the quest here:
https://linedia.ru/wiki/Four_Goblets

Скрытый текст
The clan system has been reworked:

Clan level 3 - all buffs of the CBC are available (Swordsinger)

To raise the level of a clan, a clan must have 5+ players

Changed prices for raising the level of the clan:

* Blood Mark, Alliance Manifesto, and Seal of Aspiration are available in the um shop
Any clan penalty - 24 hours, except for banishment by the clan leader

Clan skills have been reworked, all skills add static, not further rated stats:

Physical Defense +1000 for each level

2 castles are available for sieges - Giran and Aden
Sieges every 3 days, the first sieges start **. 07.2021
Registration for sieges closes 30 minutes before the start of the siege
When owning a castle, all clan players receive an additional clan skill

Clan halls have been updated, namely, only 5 clan halls are available for purchase:

The following buffs are available to the owner of the clan halls:

The duration of the clan hall buffs is 60 minutes, they do not replace passive buffs

The cost of buffs has also been increased:

Olympiad period - 7 days
Duration of the Olympiad: from 18:00 to 00:00 Moscow time
Olympiad runs every day
Enchant limit +7
5 players are required to start the Olympiad
For each victory at the Olympiad, you get 1 Olympiad Coin
Hiro weapon, additionally adds Upgraded weapon stats (+ p / m attack Скрытый текст
Your character must be level 80 to be able to reset!

Restriction of Resetting the character level for a reward - 80 times (that is, you can get a maximum of 80 Reset Coin)

Delay between receiving the bonus - 12 hours

Reset level is not available on subclasses

Скрытый текст
Expanded the limits of inventory slots to 250, for crafting to 150

Global chat (shout!) From level 10
Implemented the Shift + Click system on the NPC, to view the characteristics, drop
Added runes XP / SP, increasing rates by 75% and 50%

Recipes for crafting Rus Coin can be looted from some mobs in the Varka Silenos Outpost location: Event Box - issued to the winning team for participating in auto-events, if you double-click, you will receive 1 of 5 runes for 4 hours

AQ Stone - can be knocked out of Queen Ant with a 70% chance, exchanged in the exchanger 2 AQ Stone

to 1 Ring of Queen Ant

A grade part - drops from Shadow_of_Halisha (https://linedia.ru/wiki/Four_Goblets) with 100% chance, currency is required to buy / upgrade A grade armor

S grade part - drops from all mobs in Primeval Isle with a 2.5% chance, currency is required to upgrade S grade armor

Sub Coin - bought in the GM-shop, this currency is required to obtain a sub-class

Clan Skill Book - Bought in the GM shop, drops from Cherub Galaxia and Shadow of Halisha is required to learn clan skills

Clan Reputation Coin - Drops from RB Cherub Galaxia in the amount of 5-15pcs, when double-clicked, adds +100 clan reputation to the clan (clan must be 3 or higher)

Description of stats and armor upgrade A / S grade:

A grade :
The stats of A grade sets increase as follows:

The characteristics of S grade sets increase as follows:

The upgrade is carried out at the NPC "Gm-Shop", only if you have a part of the armor that you want to improve (like a mammon, when you upgrade a gun), while the level of sharpening remains

To upgrade by level you need:

On our server, the maximum CA level is 14, the CA upgrade from level 13 to level 14 is possible only on RB "Anais", which is located in the Monastery of Silence

Teleport to Anais is available from the usual global GK in Goddart: 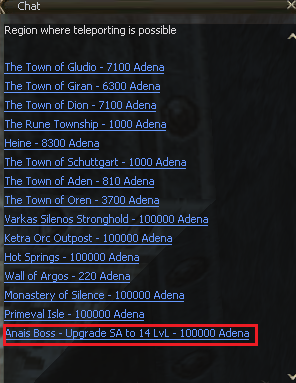 Soul Crystal is pumped automatically to the whole party, the chance of pumping is 8%